Enter your City name or Pincode

Shantipur in Nadia district of West Bengal is a municipality and one of the fast developing cities of West Bengal. If you visit this place of Shantipur, you can find a fort known ‘Daak-Gharh’ that was constructed by the King Krishnachandra who used to rule the kingdom of Nadia. The region is popular for trading handloom sarees. The weavers expert in crafting these beautiful pieces hails from Bangladesh (Dhakha), who settled in the Phulia region of Shantipur. Today one can find many engaged in weaving and trading businesses in Shantipur. 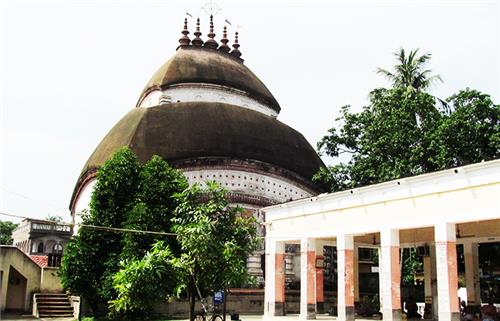 History of Shantipur is merged with two categories such as religious history and handloom weaving history.

Religious History
Baro Gosai and Madhyam Gosai are the two important families in Shantipur, where the idol of Radha and Krishna is installed. In Baro Gosai, the idol is popular as ‘Radha-Raman’; while in Madhyam Gosai, it’s been known as Gokulchand.  This idol is actually given by Mathuresh Goswami but was renamed later by Gosai family.  There is a short story about this Krishna statue. Earlier, this idol was installed by the King called ‘Indradyumna’ (Orissa State). And he named this statue as ‘Dol-Govinda’.
When king of Yessore (now in Bangladesh) attacked Orissa he brought this deity with him to his home town. Later, during the administration of the great king ‘Pratapaditya’, he gave the idol to the priest of the temple, and then the idol came in to the hands of Mathuresh Goswami (Master or Guru of the priest), who knowing the critical conditions (the idol getting destroyed by enemies), he carries to his place, and re-installs in the latest temple. Then, as the time passes, he plans to worship the idol of Radha (wife of Krishna) along with Dol-govinda. So, he places idol of Radha besides Lord Krishna (Dol-Govinda); and later which, these idols of ‘Radha and Raman’ were worshipped as “Radha-Raman”. Apart from religious history, Shantipur also has a history of Sanskrit literature as well as the Vedic learning of 9th century. Also, this city has a very good history of handloom weaving which is about 500 years old.

History of Handlooms Weaving
Shantipur which is considered as the city is famous for handloom garments, and fulia which is the neighbouring place is the breath of Shantipur; and these handlooms are thus famous as both Shantipur handlooms as well as Fulia handlooms. In both these places, you can find giant handloom centres, where you could find 1.25 lakhs handlooms produced in the form of Tangail, as well as the Jamdani, etc.  Also, Shantipuri handloom sarees are available from cotton to tussar and silk; even dhotis, dupattas, stoles and scarves are woven here; one can even find woven chaddars. However, these Shantipur or Fulia saris have a great demand and are more popular as Bengali Handloom Saris.
There are few records of handloom saree weaving activity in the city of Shantipur, which is a centre for Vaishnavite culture and Bhakti movement. Right from the 15th Century, the activity of weaving has been improved throughout the medieval period, and the most popular indigo-dyed Neelambari of Shantipur has become the household names such as nilambari, or Krishna Nilamadhava, etc. These are the colors mentioned in such forms meaning sky blue or deep dark navy blue color.

Shantipur Municipality is the 2nd oldest municipality that was established during the year 1853. During that time, there was only chairman, and Iswar Chandra Ghoshal was the first Chairman in this city. All the roles and responsibilities were handled by the Chairman and Commissioners of this Municipality. There were two commissioners which were namely ‘Sri Krishna Ballav Pramanik’ and ‘Sri Shib Chandra Paul’. And these Chairmans and Commissioners keep changing most often. After Ishwar Chandra, Nabin Chandra Sen became the next chairman, and after him, there were some other chairmen, who handled the same roles and responsibilities of Municipality.  The Roles and Responsibilities of Municipality include providing special services during festivals like Ras Utsab, providing ambulances in case of emergencies, providing vans for carrying dead bodies, and so on.

Shantipur lies at an latitude of 23.25°N and longitude of 88.43°E, with an average altitude of 15 meters (49 feet). This city is surrounded by some hills at a distance of about 300 to 350 kms away from this region. Such type of attractive hills are namely the Malayagiri, Mowdok Mual, and Ajodhya Hills.

As per 2001 census of India, Shantipur had a total population of about 138,195, and out of whichmales constitute 51 cent, and total female population about 49 percent. Population of children less than age of 6 was about 12 percent. While, the average literacy rate is about 64 percent; amongst which, the total male literacy was 69 percent, and literacy rate of female was 58 percent.


Culture and Festivals of Shantipur

Culture of Shantipur is highlighted by the festival celebration in the location of Shantipur. And the city is most popular for celebration of several fairs and festivals; few among which, are the ‘Rasutsav’ and ‘Dolutsav’. Some other festivals include the ‘Rashyatra’ (belongs to Lord Krishna), as well as Mata Kali Puja. These are the main festivals celebrated grandly in the city of Shantipur that has been attracting several people around the city and from all over India.

The most popular sweet dishes prepared in Shantipur are Rasmalai, Rosogollas, Sandesh, as well as spicy food items like the Chingri Malaikari, Panch phoron, and some other delicious dishes. Rice and Dhaal are the most commonly cooked food that is served in Shantipur. And most interesting thing in this place is that, besides these food stuff, you will be able to find all other Bengali recipes here, including North and South Indian cuisines.


Business and Economy of Shantipur

Many businesses are operated at Shantipur, and economy of Shantipur purely depends upon the returns of these businesses. The main occupation of this city is the arts and handicrafts like handlooms, as well as the textiles, which gives a good profit to the business people in this city of Shantipur and in turn has been an important factor in the rise of economy in Shantipur.

When you visit Shantipur, you will presence of numerous services like banks, hospitals, police stations, computer services, and lot more. These services are of importance and together play pivotal role in making the life comfortable. The

Shantipur is very well-connected by railways and road ways via Sealdah North section. Apart from this, the city is also well-associated with the North and South Bengal through several State Transport Services. One can even find the city of Shantipur that is associated with the Burdawan or Kalna district, including Hoogly or Guptipara via the River Ganges or Bhagirati that lies on the Northside (NH 34). The best way to travel to this city is via railways. Shantipur Railway Station comes under Eastern Railway, Sealdah. Howrah Junction is the nearest station to Shantipur.

Like other cities, you can also find many options to shop in Shantipur, such as garments shopping, footwear shopping, furniture shopping, as well as shopping of gifts, electronics shopping, house-hold utensils, home decors, and also shop for some other kinds of essential items. You can even do jewellery shopping in Shantipur as well.

Are you a Business Owner?

Add the products or services you offer